Kosovo’s status as a country is somewhat contentious. After claiming independence from Serbia in 2008, it is only partially recognised within the United Nations (43% of the member states don’t acknowledge it as an independent state). Still, that’s 57% of member states that do recognise it, so as far as we were concerned, that was enough to justify making a Kosovan dish. However, a nine-year-old country doesn’t exactly have a traditional national dish. Due to historical and ethnic connections with Albania (see, this just gets more complicated), Kosovan cuisine has been particularly influenced by Albanian cuisine. We haven’t yet made a dish from Albania so we didn’t want to accidentally make Albania’s national dish for Kosovo!

Fortunately, we stumbled upon tavë prizreni, which translates to Plate of Prizren, Prizren being a Kosovan city. This seemed like the closest thing to a national dish that we were going to find, so Friday’s dinner menu was decided! It was impossible to find a recipe in English, though, so we turned to Google Translate, which is always fun: we had to decipher such instructions as ‘put the mass of the pizza into the pan’ and ingredients like ‘lacquered and cropped tomatoes’. We think that our recipe below is a pretty accurate version of the original dish, but if we have any Kosovan readers, please do set us straight if we’re wrong!

Method
1. Heat some oil in a large frying pan and add the onions and peppers. Cook until softened.
2. Add the tomatoes and cook for a few minutes.
3. Add the salt and parsley, and again cook for a few minutes.
4. Put this mixture into a baking dish.
5. In a bowl, beat the eggs and add the flour and yoghurt and mix well. Pour this over the vegetables in the baking dish.
6. Sprinkle the grated cheese over the top.
7. Bake for 45 minutes at 120C. (Optional: we then put it under a hot grill for a few minutes to brown the cheese more>)
Serves 4 (we served with rice) 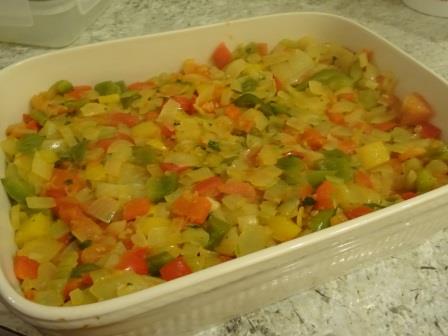 Despite concerns about a fairly basic list of ingredients, we enjoyed this! Our more carnivorous sides felt that it might have been better with some bacon or similar, but conceded that it certainly wasn’t necessary. The vegetables tasted as you’d expect, and whilst it’s hard to describe the texture of the topping, I suppose you could say it was kind of like a mix of a set custard and cottage cheese. And melted cheese is always a good thing! It wasn’t an exciting dish, exactly, but it was easy to make and used ingredients that we almost always have in stock, so it might make it into the repertoire for a midweek meal.

Next, we’ll be returning to the Caribbean with a dish from Montserrat, that is going to be very different from this one!