Here we are again at a country we’ve been fortunate enough to visit. We spent a weekend in Luxembourg City in December 2015. The main purpose of the trip was to visit the Christmas markets: after visiting the markets in Hamburg a couple of years earlier and realising the delights of spending a couple of days wandering around, eating street food and drinking glühwein, we wanted to experience the same thing somewhere else. Luxembourg did not disappoint (and it wasn’t as bitterly cold as Hamburg had been!). 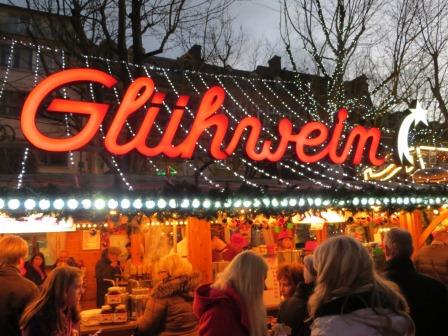 Our stomachs were well and truly indulged on that trip. In addition to the glühwein already mentioned (and not forgetting the version served with a rum-soaked and flaming cone of sugar perched on top so it could slowly melt into the drink!) and the eierpunsch (eggnog), there was the perpetual lure of bratwurst, sides of salmon smoked over an open fire and served in a bread roll, the inspired combination of marzipan-filled pretzels, and complimentary ‘executive lounge’ beverages and petit-fours in our hotel. It’s a good thing we also found time for a couple of long walks around the city! 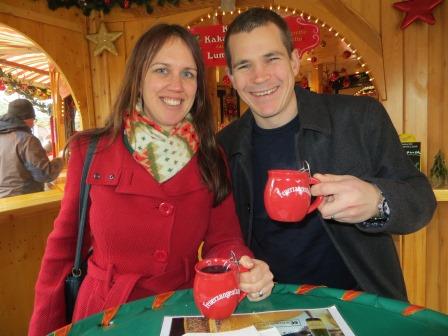 Then there was Mousel’s Cantine, apparently the place to visit for traditional Luxembourgish cuisine. As we were there for one night only and wanted to experience the local dishes as well as those served at the Christmas market, we headed there from our hotel (down a fairly perilous dark and icy hill!) and treated ourselves to big plates of pork, beans, sauerkraut and potatoes. Ash had a sort of Luxembourgish mixed grill, whilst Miranda had to try the national dish, Judd mat Gaardebounen (smoked pork collar with broad bean sauce). At the time, it didn’t really occur to either of us that eventually we’d be making it again for the purposes of this challenge! 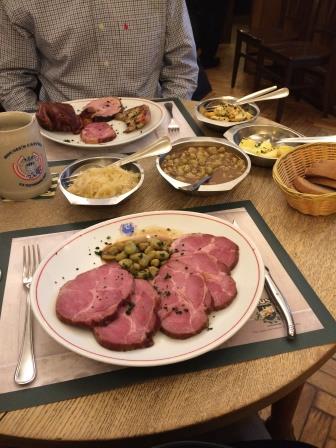 ‘Challenge’ is, in fact, an apposite word to describe our experiences of making this particular dish. We first intended to make it when Luxembourg appeared on our list in June, but Ash’s distaste for frozen broad beans meant that we had to wait until they were in season later in the summer. However, despite keeping an eye on our local market, we didn’t find any fresh broad beans until we finally spotted them in a large supermarket in September! Then, once they’d been tracked down, our next mission was finding a smoked pork collar, or in fact any pork collar at all. We eventually found a pork collar in a nearby Polish supermarket, but it wasn’t smoked. Fortunately, the recipe we used had instructions for smoking your own pork collar, so we could finally get started.

Ingredients
1.5kg smoked pork collar (or unsmoked – see below)
1 kg fresh broad beans, podded and shelled (it is easiest to shell them after blanching them)
1kg potatoes, peeled and quartered
2 tbsp cooking oil
4 garlic cloves, crushed
6 parsley sprigs, chopped (although we realised too late that most of our parsley had gone off, so we barely managed to salvage 6 parsley leaves)
1 leek, roughly chopped
150g carrot (1-2 carrots), roughly chopped
150g onion, peeled but whole, studded with 4 cloves
4 celery stalks, roughly chopped
125ml dry white wine (although we left this out and substituted some generous squeezes of lemon juice)
50g butter
50g flour
2 bay leaves
15g summer savoury (substitutes for this would be a combination of rosemary, thyme and/or mint)
Salt and pepper
Water

If you are smoking your pork:
1. Use a large and deep saucepan with a lid into which you can fit a rack or steamer. Line the saucepan with slightly crumpled kitchen foil to protect the base.
2. Add the smoking ingredients and place the rack with the meat on it over the top.
3. Put the lid on the pan and heat it over a low heat.
4. Turn the meat every 10 minutes until it is evenly coloured (about 40 minutes once the pan gets up to temperature and actually starts smoking.

Once the pork is smoked:
1. Put the pork collar, bay leaves, carrot, celery, leek and onion into a large pot and cover with water. Bring to the boil, reduce the heat, cover and simmer for 2 hours.

The following steps need to be done in a logical order and timeframe for them to all be ready together – use your judgement!

2. In the meantime, parboil the potatoes and set aside.
3. Make a dark roux with the butter and flour, add 250ml of the cooking liquid, bring to the boil, then simmer for 5 minutes until velvety and thick.
4. Blanch the beans in boiling salted water for about five minutes and then make sure their outer shells have been removed. Set aside.
5. Add the wine (or a dash of vinegar and/or lemon juice) and summer savoury to the sauce, bring slowly to a low boil, reduce the heat and simmer for 10 minutes. Season.
6. Heat the oil in a large frying pan over medium heat and sauté the potatoes. Add 250ml of the cooking liquid and the garlic, increase the heat and reduce until the liquid has evaporated.
7. Add the broad beans to the sauce and heat through.
8. Remove the pork from the cooking liquid, leave to stand for 2 minutes and slice thickly.
9. Serve the pork with the beans and sauce and potatoes and garnish with the parsley.
Serves 6 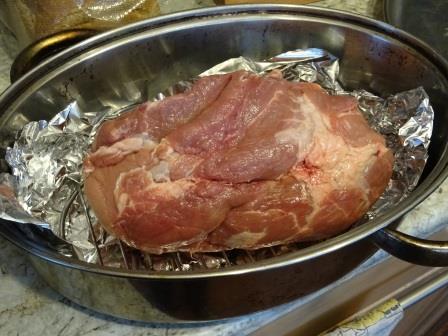 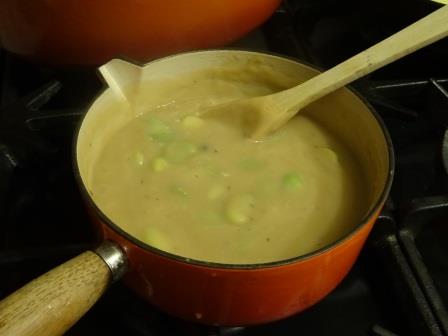 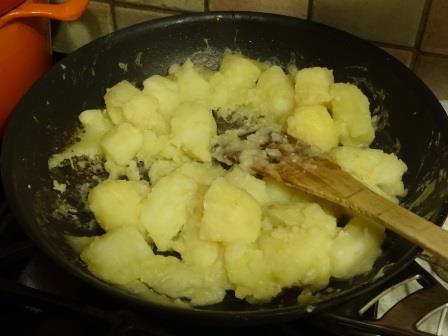 The recipe we used waxes lyrical about how Judd mat Gaardebounen is ‘legendary’ and ‘wonderful’. Our memories from eating it in Luxembourg were that it was all right, but not quite reaching those sorts of heights. And whilst we enjoyed eating it when we cooked it at home, it was still just all right, and really not worth the hours it took to put it together. The faff of smoking the pork seemed redundant as we didn’t get much of a smoky flavour even though we left it smoking for longer than the recipe said. And the finished product looked like a piece of pork that had been boiled for two hours (which is exactly what it was): grey and lifeless rather than the healthy pink we saw on the website (or, indeed, in Luxembourg). Fortunately, it tasted better than it looked, but still wasn’t remarkable.

As for the sides, the beans were fine, but the sauce wasn’t terribly exciting (admittedly, it probably would have had a bit more vitality if we’d used the wine) and let’s face it, podding and shelling broad beans is a nuisance, especially a kilo of them! The potatoes were probably the greatest triumph of the dish. All that garlic meant that we were in no danger of vampires but it did give a fantastic flavour. We did make the mistake of leaving the potatoes in water for 2 hours while they were ‘set aside’ which made them go a bit mushy, so they probably weren’t quite the texture they were supposed to be, but we didn’t actually mind that.

So all in all, whilst we’d happily experience Luxembourg’s festive December atmosphere again, we may not return to Judd mat Gaardebounen… ‘legendary’ though it may be.